The Legacy of Lyons Avenue

There’s not much to see today at the intersection of Lyons and Jensen, at the western boundary of Houston’s Fifth Ward. Three corners are vacant lots with only the foundations of long-lost buildings visible among the clumps of grass and weeds. The fourth is a parking lot for a high school named after Mickey Leland, the prominent U.S. congressman and community activist who grew up in this predominantly African-American neighborhood northeast of downtown.

The secrets of the intersection — and there are many — can be found in the zydeco, blues and soul music for which the area is known. During its heyday in the 1940s and ’50s, Fifth Ward was dubbed the “Harlem of the South,” referring to the grand musical heritage of that New York neighborhood.

Lyons was the center of this musical culture, and its stories are still told in the recordings of the area’s best-known musicians, including Clarence “Gatemouth” Brown and Weldon “Juke Boy” Bonner.

Bonner’s song “Stay Off Lyons Avenue” is one example. For a time in the ’40s and ’50s, this intersection was known as one of the city’s most dangerous because of the brawls and fights that took place there: “You better stay off Lyons Avenue/’Cause you go there, you go there green/Somewhere on Jensen, the last time you be seen.”

And yet just to the east, the stretch of Lyons between Gregg and nearby Denver Harbor became one of the most vibrant African-American neighborhoods of that era, giving rise to the Harlem comparison.

One of the more vivid descriptions of this street can be found in an article from January 3, 1951, by Sig Byrd, a Houston Press columnist at the time. In his column “The Stroller,” he documented the dark underbelly and hidden neighborhoods of the city.

Byrd refers to many of the colorful businesses along Lyons: the Monte Carlo Night Club, Poor Man Café, Huckle-Buckle Inn, Harlem Shine Parlor and the Peacock Record Shop. In front of the record shop, he runs into “a lean young man with a sharp mustache and pigskin gloves” who turns out to be none other than Gatemouth Brown.

He visited Rochelle’s Market at 3902 Lyons, too. Meat markets of that era often featured wild game, specifically raccoon, possum, rabbit and squirrel. Wild game has a long history in Southeast Texas-style barbecue, reflecting the influence of Southern U.S. dishes such as Brunswick stew, which was originally made with meat from squirrel, possum or rabbit.

Byrd covered the classic Cajun/Creole dish of baked possum and sweet potatoes as well. Indeed, Fifth Ward is home to Frenchtown, a neighborhood where Creoles from Louisiana settled in the 1920s.

These days Lyons is a street in transition, bound by the Saint Arnold Brewing complex to the west and the now mostly Hispanic and gentrifying Denver Harbor neighborhood to the east. Many of the older buildings and businesses have been torn down and replaced with newer apartment complexes and chain stores. 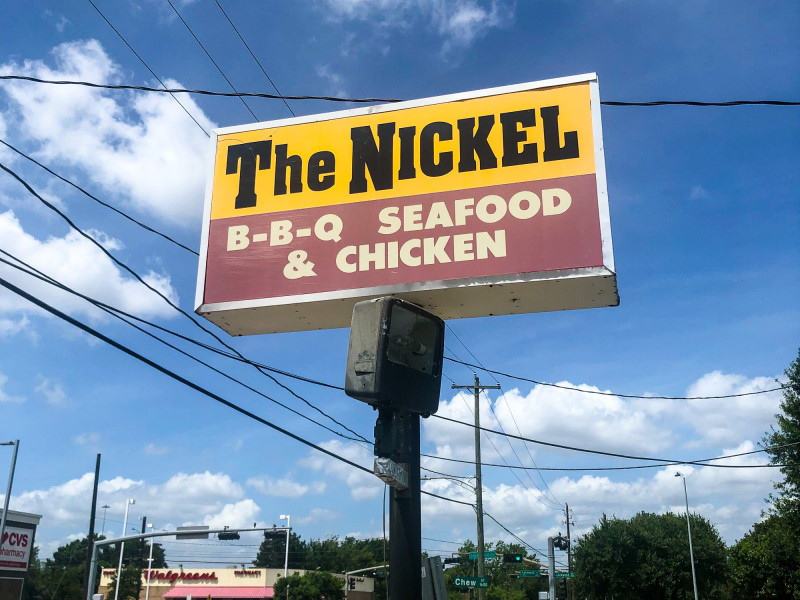 The Nickel on Lyons Ave

There are still a few remnants of Fifth Ward’s long tradition of Southeast Texas-style barbecue including the Nickel Sandwich Grill which still serves barbecue and boudin. On weekends, you might find vacant lots with “shade-tree” barbecue operations — smoked-meat entrepreneurs set up their trucks or trailers on the side of the street, under the shade of a tree, and serve barbecue.